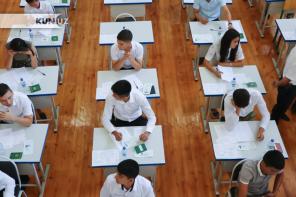 On February 23 at the Agency for Press and Information held a press conference by the State Testing Center. During the conference, the participants were informed about the upcoming changes in the entrance exams for higher education institutions.

On February 15, 2014, the regulatory.gov.uz portal was placed under a public discussion of the draft law “On additional measures to improve the system of admission to higher education institutions through testing”.

According to the draft decision, it is expected that some major changes will be made in entrance exams. The State Testing Center issued a statement on the necessity and implementation of these changes.

Nowadays, applicants and their parents receive a certificate of access to all HEIs through public service centers at their place of residence to prevent excessive costs and expenses. It is possible to pay 10-20 thousand soums for this service.

According to the Deputy Director of the DCC, Kahramon Hagberdiev, the centers of public services take into account the validity, protection of documents.

Applicants with “Internships” will pay for the exam

According to the draft decision, the current year will include payment of one minimum wage for entrance exams to higher education institutions.

According to Karimov, the fee for participation in the testing will be collected from only those who have graduated from educational institutions during the previous academic year. This year, testing for young people graduating from schools, lyceums and colleges is absolutely free, they will pass the exam without any fees.

“The proceeds from these payments will be spent on transparency of the exam process, such as video playback, personal identification, test results, and online streaming devices. The redirects will be posted on the State Testing Center website, “said the DTM leader.

According to Karimov, the exact amount of the payment is currently being monitored by the Ministry of Finance.

Three OTMs at one time

In the draft decision, applicants are given the opportunity to choose three directions of education simultaneously with the aim of increasing their access to education.

The DTM Management clarifies that applicants paying for the exam will pay once each year, regardless of how many directions they apply. In addition, applicants who have obtained more than 30% of exams will be awarded a certificate with three years of validity. The certificate may be used for admission to higher education institutions within three years.

3 + 2 disciplines can be established

That is, the applicants will pass three compulsory subjects in the chosen subject and two exams will be held. According to the DPM Director, the science complex will be announced in September-October.

Also, in order to increase the literacy level of the applicants, it is planned to obtain written work from the native language (Uzbek, Russian, Karakalpak). The assessment of writing skills is organized additionally to basic exams, but there are no clear mechanisms for this. If the applicant collects enough points in written test, he or she may not take the language test. The procedure for implementing this system will be officially announced by October of this year.

International experts are involved in the test process

According to the Director of the State Testing Center, it is planned to establish an International Scientific and Methodological Center to attract international experts to the process of testing to ensure that test procedures are up to international standards. Experts also monitor the quality of the test materials.

According to the information presented at the conference, there are major changes in entrance exams,